Told Carsten I would get a Minecraft server working for her birthday but it’s far more complicated that I thought and I’m not sure if I’ll actually be able to do it. Advice?

So, I climbed the stairs and walked into his room to have an actual conversation.  But it didn’t turn out to be much of a conversation.  I mostly listened and sat there staring at the computer he built himself for his birthday. 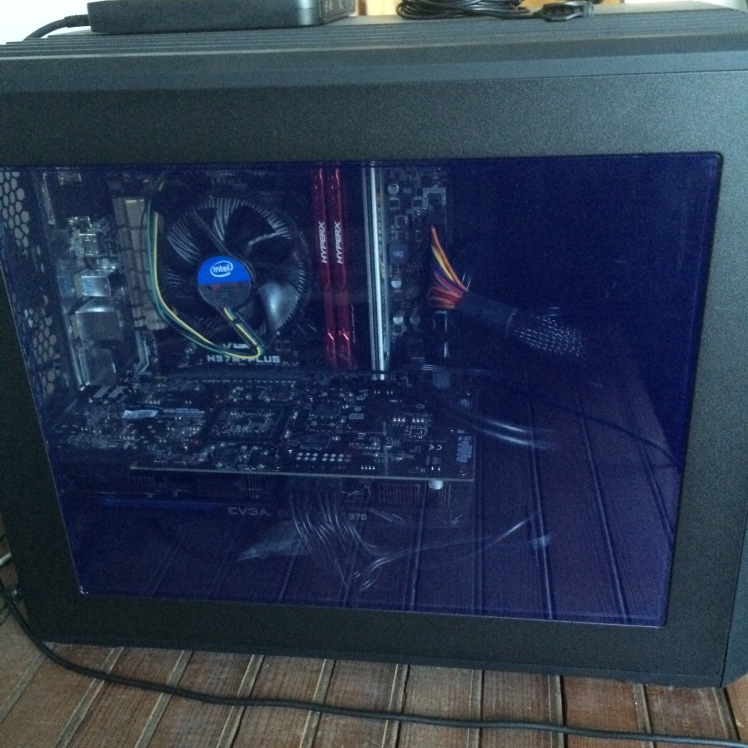 (Look!  You can see inside of it! Can you blame me being distracted?)

Cody talked about servers and code writing and command prompts and some kind of something that started with an “L” that is kind of like something Microsofty, etc….  I said, “mmm-hmmm” and “ooookay” and I understood exactly……. nothing.   Well, except the fact that if he accomplished what he wanted to he would be using an his old giant computer tower as the server and would need to put it somewhere. I did not like his suggestion of in the office under my cute new desk and he didn’t like my suggestion of his closet.

It’s actually pretty adorable that Cody thought I would have some advice, don’t you think?   In the end, the extent of my advice was, have you tried to ask The Google?  To which he responded by sighing deeply and shaking his head at me.
When I picked up Carsten, we had this conversation:

C – will he finish tonight?

C – ok. Well, I can just play now, I will just play on the server I’m already using.  But, also you need to get me a mouse because right now I’m not able to fly and <insert some other Minecraft speak here>…..

Sidebar:  Dear Mom,  Sorry about all those times I was impatient while explaining technology. Love you!   End Sidebar.

It looks like Cody is making some progress tonight, but since I’m not sure what success looks like in this situation, what would I know?

Maybe I will ask The Google.

ps. I only call it “The Google” because it horrifies both my children.  🙂

Hi! My name is Mel and this is a peek into everything that goes on inside my mind!
Join 361 other subscribers