Two years ago today I woke up to a beautiful sunny day. I was scheduled to volunteer at Carsten’s school in the morning and I had a cake to deliver in the afternoon. We were having a garage sale in the neighborhood and I was excited about hanging out with my neighbors during the rest of the day.

I turned my phone off while I was volunteering. I was only in the school for 90 minutes or so. As I walked out of the school I turned on my phone. I had 10 missed calls and 5 voicemails. When I saw that most of them were from Peggy (Stacey’s Mom) I felt like I had been punched in the gut. I listened to the voicemails, each on was more frantic than the last. Peggy said you need to come to the hospital, you need to come NOW.

I don’t really remember driving to the hospital, which way I went or how long it took me to get there. I had been there so many times to visit her, I wa just on autopilot.

When I walked up to the room I could see it was full of people. I wanted to run away. Scream. I wanted it to be a nightmare.

I told her she fought so hard and it was ok to leave. That part was a lie. In my heart I felt like I’d never be okay again if she left. I desperately wanted her to open her eyes and crack a joke, like she’d done so many times before. So many times I had thought, this is it, she can’t bounce back…. but she always did. She was so strong. Even when she was so sick, you still couldn’t believe leukemia would really beat her. But it did.

Eventually they asked everyone but immediate family to leave the room. Then they disconnected the machines and let her go.

I stood in the hall. I watched through the glass. I could tell when she was gone, by watching Peggy. But, when someone came out in the hall and actually said she was gone I fell to the floor. I don’t know how long I sat there.

I can’t believe it has been two years since she left. It still feels like yesterday.

People have told me that I don’t deal well with death. I’m not sure it’s something I want to be good at. I don’t know how long is too long to mourn for someone who you expected to be by your side for your entire life. I know there are days that Stacey would be pissed at me, for being so sad.

I miss you Stacey Louise. Every. Single. Day. 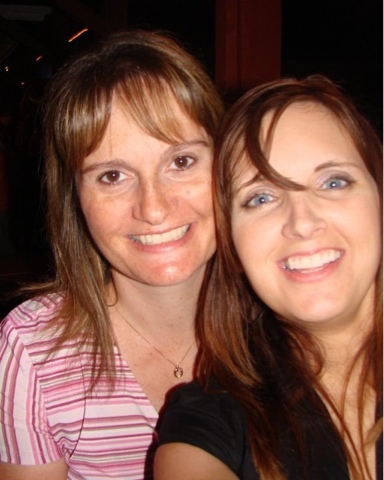 Hi! My name is Mel and this is a peek into everything that goes on inside my mind!
Join 361 other subscribers