This week’s show is called: Naked and Afraid 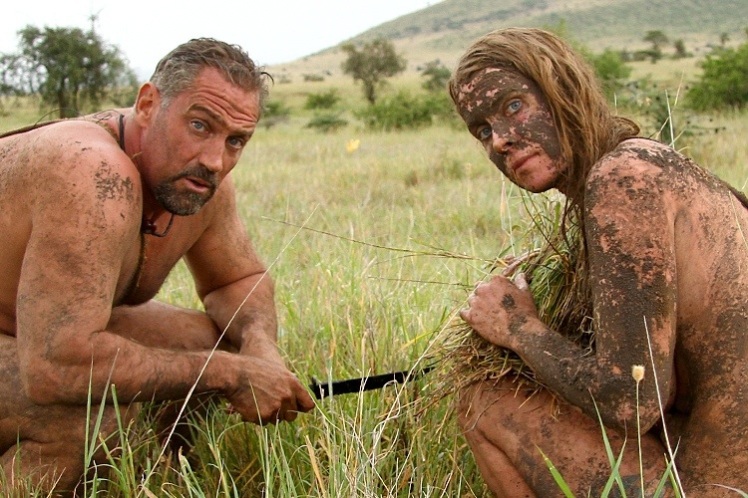 BA-BA-BAAAAAAAMMMMM!
(That was a dramatic sound effect)

Contestants are dropped off in the middle of nowhere, naked obviously, and they have to survive for 21 days.

They are given a rudimentary map, showing them a few water sources and the pick up point where they are to be in 21 days. They each get to bring one personal item, for example, in Episode 2 the man brought a knife and the woman brought a small pot.

It’s very awkward, watching them meet their expedition partner and they’re both naked. In this last episode the woman went in for a hug! A HUG! NAKED! The FIRST time she met him! GAH! The thought of their cold saggy body parts touching made me want to urp!

Inevitably, there is arguing. The contestants, on average, lose around 30 pounds during their expedition. Food is almost impossible to find, because it’s a full time job just tending the fire and finding water. They are so depleted by hunger that they lay around a lot. Naked. After about the 2nd day they seem to forget they are naked and just get on with business. However, I can never seem to forget they are naked. The entire time my brain is screaming, WEAVE A BIKINI! or for the love of God, FIND A LARGE LEAF!

Sidebar: I feel like I’d NEVER forget I was naked, and the dirtier and the more hairy I got, the more I’d notice that I was naked. And dirty. And also naked.

They eat next to nothing. There’s only been two episodes so far and I’ve seen both pairs of adventurers eat less in two weeks than I eat in one day. What they DO eat is disgusting. Ants. Grubs. Snake. Turtle.

This show is riveting to me. I’m fascinated that these people are willing to do this…. for nothing. There’s no cash prize at the end of this journey. There’s nothing except an anti climatic helicopter ride out of their personal hell. There isn’t even a host saying, “Congratulations! You’re not dead!” It’s like Survivor Concentration Camp. Or a really, REALLY stupid diet plan.

I can’t stop watching it though, so BRAVO Discovery Channel! I’m only marginally less embarrassed to admit I’m watching this show than say….. Devious Maids. But, I’ll leave that show for another day.

What about you? Would you be willing to be naked and afraid JUST for the experience?

10 thoughts on “What I am watching”