…. and I am addicted to a de-shedding brush.

Backstory:
We had a de-shedding brush a few years ago, but I got banned from using it after an episode wherein I drank a lot and then decided to de-shed our Siamese cat. Problem was, I only combed directly down the center of her back. I gave her a reverse Mohawk! She was almost completely bald in the center and still totally furry on both sides.

So, after that the de-shedding brush got misplaced and the pets were free to shed EVERYWHERE. I felt like they’d walk by and I’d see a cloud of fur floating behind them.

The only thing I found to satisfy the urges was vacuuming the Siamese. (she totally cooperates, I swear.) But that still left two other pets that were walking around shedding a pound if hair a day. I searched high and low for that brush, but I never found it. 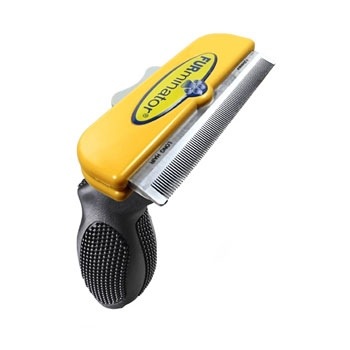 I got home and Mini-me (Carsten) was so excited you would’ve thought I bought her a Walgreens store! (she needs Walgreens to live). We spent an hour brushing anything that would sit/stand still long enough! Including Moose and he doesn’t even shed!

We filled an entire Wal-Mart sack full of fur. We were pretty damn proud of that sack! We kept opening it and exclaiming, “LOOK AT ALL THAT FUR!!!” We showed it to Cody, but he was completely unimpressed.

We eventually had to stop when Chuck the cat demonstrated that he had had enough.

It was a good day.

Today however, the pets seems to be a little uneasy. I swear they scattered when they heard me crinkle a Wal-Mart sack.

I probably should ask the Google how often to de shed your pet.

While weekly deShedding is fine for short hair pets, medium to long hair pets may need to be deShedded a few minutes each day to prevent mats, tangles and dirt.